Mr Chengkuan Wang – President of AVIC Aircraft XI’AN Commercial Aircraft Corporation Ltd delivered a brilliant introduction of MA700 Aircraft and its history.  The MA700 is a twin-engine, medium-range turboprop airliner currently under development & manufacture by Xi’an Aircraft Industrial Corporation of the Aviation Industry Corporation of China (AVIC). Mr Wang explained “The One Belt One Road (OBOR) strategy” and stated “regional aircraft will be an important participant in building the traffic network of the OBOR related area, and emerging markets.”  By 2015 there were 185 orders for the 70-seat aircraft with purchase agreements with 11 customers including Joy Air, Okay Airways and Cambodia Bayon Airlines. The first prototype will be finally assembled in 2016, with a maiden flight in 2017 and certification scheduled for 2019. 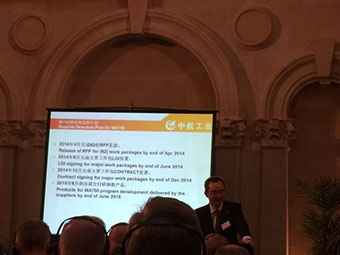 Ford Aerospace Ltd has followed the MA700 program since 2010 after a meeting with MA700 team in London. Members of the Ford and MA700 teams continued to have several discussions in Xi’an in China 2012 & 2013, and at Zhuhai Airshow 2014. As part of the UK/China government to government annual aviation working group meeting, ADS Group and UKTI organized the Chinese Aerospace Market Seminar in Bristol this October 2015. Ford was invited to attend the seminar and present a range of typical aerospace components at the table exhibition to show the wide range of Capabilities the group has to offer. Mr Chengkuan Wang, Mr Huijiang Xiao – Vice Chief Engineer & Director of Program Management Department, COMAC Shanghai Aircraft Manufacturing Co., Ltd and another 11 delegation members from AVIC and COMAC showed their interest in Ford brand peelable laminated material “easipeel” and were impressed by the quality of the parts manufactured by Ford Aerospace. Ford is the only one British supplier of the laminated material to the C919 aircraft; and Ford joined this seminar to launch another journey to the China Aerospace market. Chris Ford comments “this seminar helps FORD understand the latest status and opportunities in the Chinese aerospace market, not only MA700 but also the wide body airlines after C919, which is in line with our Vision – To be a world class supplier of quality precision engineered products to all our customers 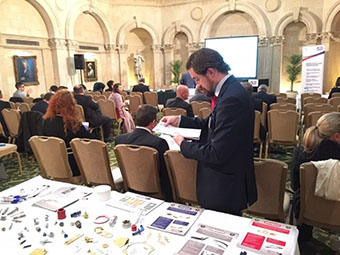